For whatever reason my expression of the world has generally been eclectic. 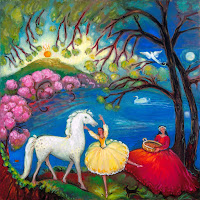 It must have something to do with my essence and the world born into…Oklahoma, South America, the Southwest, and California. 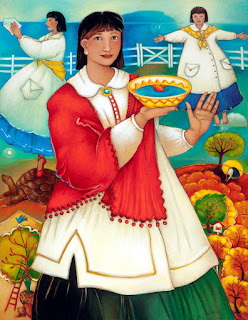 My father and his grandfather were both story tellers. Guess I inherited that gene. Being men, their stories seemed to be more about their adventures out in the world. My tales are based more on feelings… observed in simple everyday moments of life.

Once upon a garden ...this story is based on events from my growing up to which I now have two large tortoises in the yard as living symbols.

“The creation of art
in all it’s diverse forms
allows each one of us
to sing the song anew.” 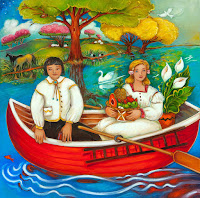 The first part of my painting life, as I see it now was devoted to learning a language…technique, developing characters…mostly a woman’s perspective. I decided early on to use women and children as my story telling characters. One day I noticed that my men had a feminine/masculine look and the women masculine/feminine. So from then on woman became my symbol for both. Though I still picture the man child.

Myth is a feature of every culture.

I guess, Mythology has always been there in the background of my work.  Throughout time man has used symbols to give clues to what I refer to as “The Mystery of Life.” Over the years I have collected a variety of images that have developed special meanings  for me in my narratives…like the blue vase with goldfish that appear repeatedly in my stories.The red book has been there from the beginning. My stories on canvas were once more genre scenes.

In nature. Now they have become more personal and symbolic.

“Standing witness to the world that surrounds me…
Translating ideas, impressions and observations…
Getting to play all the parts in the story as it unfolds
With color, form and thought…
Each painting reflecting the world at particular moments in my life…
Accented with personal symbols
Collected over my 48 years of painting”

Crossing over
(fish, boat and swan plus my special character) 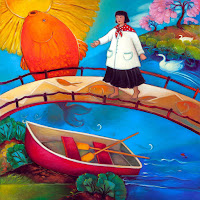 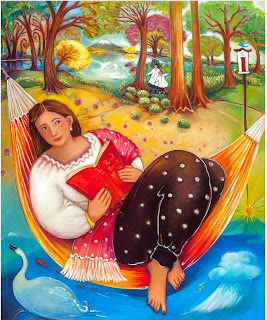