Tactile Art: The Thrill of the Touch

In my last blog, I talked about three sculptors who have found their artistic expression in three-dimensional art. All of them said that they love the feel of creating art in a tactile way. You could say the sense of touch is an integral part of their work. 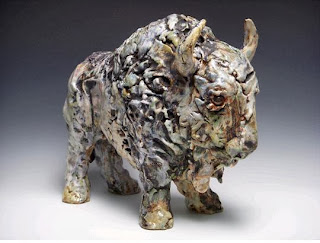 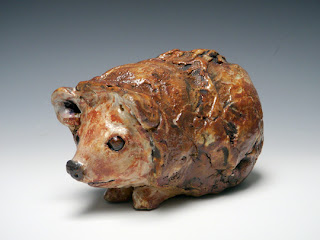 To continue this theme, I talked to three other 3D artists who display at the gallery. The first two are ceramicists, whose tactile expressions are revealed directly in their art. The third is a glass artist, whose journey to a finished piece is a little more complicated.

Kari Rives began her artistic career as a painter, favoring a palette knife and her fingers instead of brushes, to create highly textured work. Her love of a hands-on technique led her to try ceramics, combining her painterly skills with modeling. “Clay made good sense to me,” she says. “Its tactile nature provides a great opportunity for expressive gesture, and I prefer to leave the evidence of my touch.”

You can see an example of Kari’s mark making on her ceramics in two charming sculptures, entitled “Hedgerow” and “Bruce” (shown above). She doesn’t sketch before sculpting, and although she refers to photos, she doesn’t strive for realism, saying that “an animal speaks to me, so I feel an emotion and convey life in the piece.”

Although Kari enjoys the painterly part of coloring her sculptures, she likes the uncertainty that results from firing a piece. “You really don’t know what’s going to happen, and the surprises can be great” she says. Often, she’ll re-fire a sculpture, sometimes as much as eight times, to achieve depth and layers of color. I think you can see these layers in her piece entitled “Emerald Turtle.”

Michelle MacKenzie also started exploring art as a painter. But she, too, loves the tactile thrill of “taking a ball of clay and creating something beautiful from it.” And, she adds, “When it’s done you can touch it!” Michelle is passionate about animals and looks to them for inspiration. She has a keen interest in birds, and says “Birds symbolize life to me. Sculpting them is so delightful. As I work, they’re in the palm of my hand and their face is looking up at me.”

Michelle’s bird series is charming. She uses old wire to form a nest, makes ceramic eggs and creates a family setting with a mother bird. Here’s an example of her bird collection: 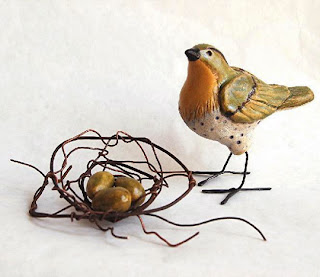 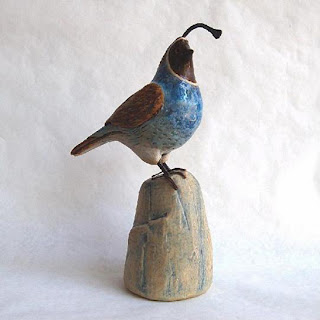 For her sculpture entitled “Quail on a Rock,” she uses a horseshoe nail to create the quail’s topnotch.

Always on the lookout for found objects, Michelle likes to mix up her mediums. For her sculpture “Guardian,” she re-finished an old shutter door, added trim where the hinges had been and created a ceramic bas relief to depict the wolves as “animal spirits of the forest.” Although it’s meant to be hung on a wall, this piece still offers the texture and depth of three-dimensional art.

Although Tom Philabaum had a natural ability to draw and paint as a child, his initial pursuit in college was academics, But when he decided to take a ceramics class, he says “the clay grabbed me.” Tom focused on hand building, working in such a large scale that his instructor told him that his ideas were too fluid for clay, and that he should try glass. 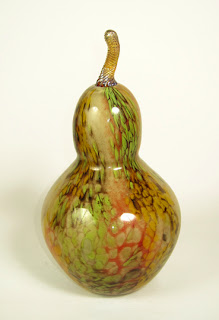 A chance meeting in Wisconsin with Harvey Littleton changed the course of Tom’s artistic career. (Littleton and glass scientist Dominick Labino introduced glass as an art medium in 1962, and Littleton taught the first glass-blowing class in an American college at the University of Wisconsin-Madison.) Tom was drawn to the expressive possibilities of glass, and, under the tutelage of Harvey Littleton, was encouraged to push the boundaries of artistic expression in that medium. He started to work with glass in the same way he had worked with clay: by creating shapes and constructing objects with them. “I use heat instead of water to make the material flow,” he explains. 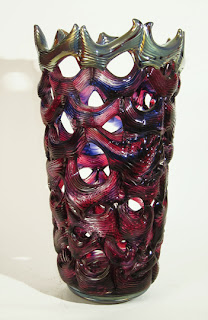 You can see the unique way Tom fashions glass in his rock sculptures, made of blown glass and fashioned together. In pieces like “Small Gourd” and “Round Paperweight”, the balls of glass appear to be floating, yet delicately attached. The shimmering, multi-colored hues of the sculptures look so ethereal.

Tom says that he has learned the principles of chemistry and physics through glass making. His various techniques require new understandings of the medium each time he tries a different idea. For his sculpture entitled “Wrapped,” he combines two mediums: clay and kiln cast glass, making a form in clay, a mold from that and then pouring glass into the mold to create the final piece. In his series called “Handbuilts,” he makes coils with molten glass and then creates a form such as the vessel entitled “Canasta 18.”

A recent exploration has led Tom to a fusion of glass making and painting. “River Road” is an example of his fused glass collage painting series. In this multi-step, complex process, 2D and 3D have a chance to meet!

The year 2012 marks the 50th anniversary of the development of studio art glass in America. To celebrate this milestone and recognize the many talented glass artists, many glass demonstrations, lectures and exhibitions will take place in museums, galleries, art centers, universities, organizations, festivals and other venues across the United States throughout 2012.


Here’s a brief history of the glass art movement, taken from a post from the Milwaukee Art Museum. “Fifty years ago, in 1962, Wisconsin artist Harvey Littleton and glass scientist Dominick Labino introduced glass as a medium for artistic expression in two workshops at the Toledo Museum of Art in Ohio. Littleton and Labino developed small furnaces and a glass formula with a low melting point, making it possible for individual artists to work with glass outside of an industrial setting. In 1963 Littleton taught the first glass-blowing class in an American college at the University of Wisconsin–Madison.


“This combination of events kick-started the American Studio Glass movement and introduced a generation of trained artists to glass as a medium for individual, creative expression. In other words, glass moved out of the factory and into artists’ studios.”

In Scottsdale, glass artistry by some of Arizona’s finest artists will be featured during the “Glass Act” art walk on Thursday, April 12, from 7-9pm.

Tom Philabaum is a veteran accomplished glass artist. He built his first glassblowing studio in 1975 in downtown Tucson, and opened a gallery in 1982. Since that time, the Philabaum Glass Gallery has been showing artists from across the country. Tom continues to spearhead the studio of blown glass, and the more current sculptural and site specific art, using a broad array of techniques, including kiln casting, fusing, slumping, and dalle de verre.

At Wilde Meyer, you can see pieces from his Precarious Rock Series. Some have scavo surfaces, a difficult Venetian glass-blowing technique that results in giving a blown glass object the appearance of an artifact dug-up after centuries. (Scavo means unearthed in Italian.) Others in the series celebrate bright color combinations. The precarious notion comes from the fact that the “rocks” are faceted and laminated in seemingly gravity-defying positions.

I think that glass artists and collectors are all interested in the effects of different lighting on glass. These changes give glass art life and make it different from two-dimensional work. Sandy Pendleton’s glass pieces have an iridescent quality to them and many textured surfaces that allow light to bounce around. Sandy notes that they change with the light over the course of a day and become more dramatic in the evening. I can see this happening with her “Violet Geology” Bowl and her “Sapphire River” piece.

After a lifetime of artistic work in other media, Sue Goldsand discovered fused glass and knew she had found her passion. She likes this medium because it allows her to use strong colors and bold designs to depict her charming animal figures.

Each piece has its own personality. “Teets”, her colorful bird, “Blue Standing Dog” and “Cool Green Cat” are examples of her work.
﻿

Dave Klein started blowing glass in Prescott with Michael Joplin in 1980. He enjoys the constant challenge of combining techniques to produce unique works. Dave is the director and co-founder of the Sonoran Glass Art Academy. His statement about glass art conveys the excitement of this 50-year-old art form: “It is the dawn of the ‘Glass Age’, glass technology is racing as never before, new techniques, materials and discoveries are literally exploding in the industry. Glass artists can now take advantage of many new materials and techniques to push the industrial and artistic envelope.”
At Wilde Meyer, Dave glass bowls and display plates are beautiful examples of his proficiency in this medium.
﻿﻿﻿
﻿﻿﻿
﻿﻿﻿
﻿﻿﻿
﻿﻿
﻿﻿