It’s A Dog’s World,-At Least for This Month


We all know that dogs are man’s best friend, right? I think that you could also say that dogs are one of Wilde Meyer artist’s favorite subjects – especially right now, when the 20th annual “Dog Days of Summer” show is up at the Marshall Way gallery. As noted in the show invitation, the "dog days of summer" refers to the period of time between early July and early September when the Dog Star, Sirius, is visible in the night sky. Presumably because Sirius appeared during the very warm days in August, "dog days" came to signify the hot humid days of summer.

There are several great things about this show. First, it features small and affordable paintings. So, it’s a great way to collect a piece by a favorite artist without spending too much. Second, it showcases many different kinds of dogs in so many painterly ways.


Some artists choose to paint the dog in a more realistic manner, such as Sarah Webber who has done an impressionistic portrait of a coyote. Others, such as Melinda Curtin, favor a more non-traditional route. Her dancing dog is reverse-painted on glass in a contemporary, funky way.


If you follow the artists at Wilde Meyer, I’m sure you’ll recognize their style in these small dog paintings. Linda Carter Holman’s painting has so many of her favorite “accessories:” calla lilies, a pearl necklace on the dog, a bowl of fruit, lovebirds and a goldfish bowl. Trevor Mikula shows his wacky characters- some adorable hounds you’ll probably never see in real life! As usual, Connie Townsend’s dogs are going for a joy ride – this time on a motorcycle.

You’ll also recognize Sushi Felix’s distinctive style in the stylized canines she’s portrayed. You might even recognize my two pieces (hint: Plein Air Pooch and The Secret of the Missing Cupcake). The latter was inspired by a photo of a friend’s dog who was stealing a sweet potato. I thought a cupcake would be more appealing!


The last, and maybe best, great thing about the Dog Days of Summer show is that so many artists choose to participate (more than 30 this year). It’s so much fun to paint dogs in different ways, and we all enjoy the spontaneous pleasure of working on a small canvas. So, brave the heat of August, and cool off at the gallery while selecting your favorite hound. If you’re in Tucson, the show will be up there in September. 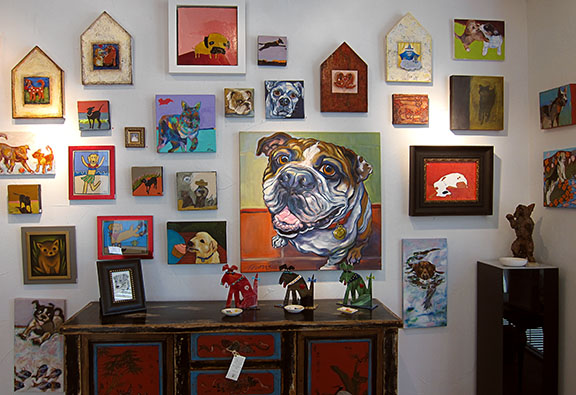 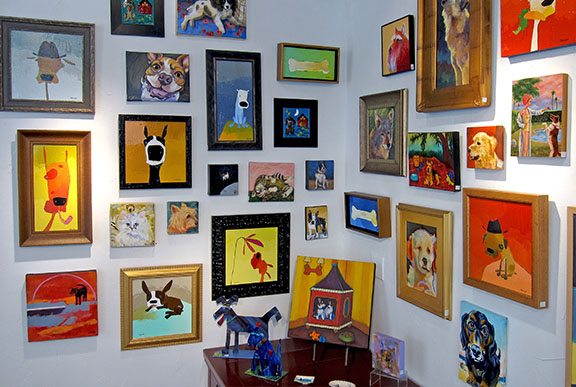