The Art of “Texting”

Text is an integral part of our language. We need the written word to learn about things, to communicate and for the pleasure of reading.

When we think of art, we generally think of imagery, either in two- or three-dimensional form. But some artists like to combine images with words and numbers. From my interviews with three different artists at Wilde Meyer, this technique is used for different reasons.

Timothy Chapman’s initial education in biology informs his choice of subject matter and use of text in his paintings. According to Timothy, his paintings owe a lot to his fondness for earlier styles of depicting animals, particularly the copperplate engravings that illustrated Buffon's Natural History, as well as Victorian animal portraiture and old scientific illustration. Since there was no photography at that time, the images are not always correct.

"The Effects of Diet on Pattern"
by Timothy Chapman

“I’ve tried to present similarly earnest, but basically inaccurate renderings of animals by using humor, irony and a surrealistic sensibility that’s not available to the scientist,” he said. Timothy also follows the tradition of naming the animal on the painting, sometimes with the correct genus nomenclature, and sometimes with an invented Latin name that could be “plausible.” For example, in his painting labeled “Onchorhynchus Zebra,” he used the correct species name for the trout, but he created his own version, with a zebra design.

Timothy’s humor comes through in his painting of “Pets of the Pleistocene.” He said, “I tried to imagine what cavemen’s pets would be like. Smilodon is the actual genus name for a saber-toothed tiger that lived in the Pleistocene era. This cat hasn’t grown into its fangs yet.”

If he doesn’t include nomenclature on a painting, Timothy comes up with interesting titles to explain the species he portrays, like “The Effects of Diet on Pattern.” “These titles use the language of a scientific historian, but in an ironic way,” he explained.

Lori Faye Bock’s colorful paintings incorporate text as a design element. Her appreciation for words came later in life, since she had dyslexia as a child. But when she had a major birthday, her mother gave her a book of quotes by women who recently turned 50. “I started reading these quotes, and found them very uplifting,” she said.

Then, the words found their way onto her paintings. She started with a series of skirt paintings, and incorporated quotes as pattern elements. The quotes come from the many books of women’s quotes that she’s collected since her birthday gift. In “Embrace the Bloom,” the quotes are hand written on orange blocks of color that are part of the skirt’s patchwork fabric.

At some point, Lori was asked to paint a more masculine image. She came up with paintings like “Your Main Squeeze.” Here, a shirt is decorated with men’s favorite things, as well as amusing quotes. She also uses rubber stamps to create text as a decorative trim – seen in this painting, and in “Hungry?”

“Incorporating hand-lettered text is a time-consuming process, but I enjoy it, “she said. “I think the words add playfulness to my work, and enhance the design.”

Brian Boner’s words and numbers are used as aesthetic elements in his paintings. After his father developed a neurological disease that deprived him of his ability to speak and decipher written words, Brian said he started to look at text differently.

“My paintings are very intuitive,” he said. “I try to capture a passing thought. Sometimes the words come first, and sometimes the images do. Some of the numbers are significant to me, such as birthdays or other important dates. Since I paint many layers, some of the images can get all or partially buried.”

Brian’s interest in bird paintings is also a memory of his father, who was an avid bird watcher. In his painting entitled “Early Morning Dreams,” he uses some text as a faint background layer. Although the two robins are painted realistically, the other mark-making elements and calligraphy convey a very personal statement. “South Cloud Palace” also makes a reference to Brian’s father, who told his children to “stay very still” when they were bird-watching.

“The Lamb, the Birds and the Bison” is another reflection of memory: Brian said the black birds are a metaphor for something ominous – perhaps the fragility of the bison herds in his native State of South Dakota. The numbers have personal meanings, too, but they are integral to the painting’s design.

Artists have the wonderful privilege of using whatever elements contribute to their artwork. For these three, text is part of their visual message.

"The Lamb, the Birds and the Bison"
by Brian Boner 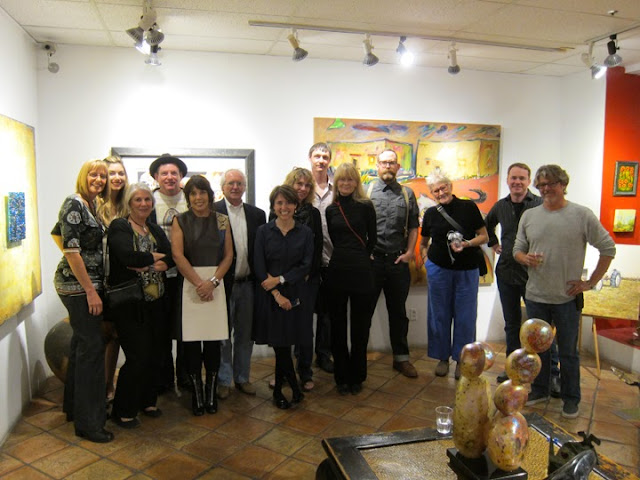 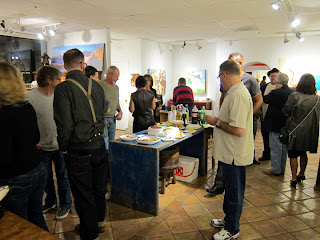 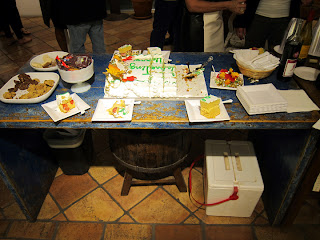 Father's Day: It's Art not Electronics


I’ve been thinking about Father’s Day, which is on June 19. I know most men would love to have an iPAD, but that would be so expected (or wished for). This year, why not do the unexpected and purchase some artwork for your husband/dad? Men enjoy seeing something attractive on their wall, and a gift of a painting can be enjoyed by the whole family.  Here at Wilde Meyer Gallery and at our online shop, ColoresAz.com, there are many selections, from giclee prints to original oils.

I definitely don’t want to be sexist about some recommendations, but since it’s for Father’s Day, I’ll go for the more “masculine” works. If your gift recipient likes cowboy art with a contemporary flair, check out prints by Thom Ross, such as “Running Gunmen,” or “The Clanton Gang Crossing Allen Street.”


Paul Sheldon also paints “manly” style, and offers several prints of his colorful cowboy work including “A Quick Cup o’ Joe,” (as seen at the top of the post) or a beautifully rendered painting of three horses called “Breakfast Bunch.”  If your guy likes cars better than horses, Paul also does a great painting called “Flatbed Ford.”

And, there are several other Wilde Meyer artists who find cars a favorite subject . . .

Bill Colt uses mixed media on canvas to depict colorful images of old power cars, such as this one, called “Desert Caddy.” His painting “Roadmaster,” takes us back to a time when big grillwork was all the rage – that might evoke some fond memories for your Dad!

Michael Baum is another artist who favors Western imagery, and his paintings depict  small mining towns and isolated ranches as well as urban street scenes. Some of Michael's paintings are lighthearted and playful, such as this giclee print on canvas called “Hide N’ Seek.” Others express the loneliness and solitude of the Western landscape.


A vintage car also appears in Stephen Morath’s high color serigraph entitled “Arizona Noche.” It’s a fantasy road trip in the southwest, where all the fun themes of the desert come together.


Women artists paint cars, too! Connie Townsend’s beefy cars are usually on a wild ride, and, as in “Beagle Scout”, they are driven by some crazy dogs.


Brian Boner’s huge oil called “Tractor 1707” would be great for a guy who has a big wall space and likes looking at cool farm machinery.

Well, actually, I think I have been sexist in my suggestions! But since you know your Father’s Day guy the best, just go back to the Wilde Meyer Gallery website and check out the other artists’ work to find the one that he’ll like.