What Fuels our Creativity?

I just finished reading an amusing book called “Steal Like an Artist,” by Austin Kleon. On one of the first pages, he says “What a good artist understands is that nothing comes from nowhere. All creative work builds on what came before. Nothing is completely original.”

Almost all artists have their muses, and I think it’s so interesting to see how artists can take inspiration from work they admire, and then incorporate certain elements into their own uniq...ue style. I also believe that inspiration comes from the subconscious, from experiences we’ve had and places we’ve been during our lives.

For me, it’s always been the post-Impressionists – especially Matisse! I admire his amazing use of color, his disregard for the rules of perspective, and his emphasis on his reactions to what he saw, and how he transmitted those feelings in his paintings. Can you see his influence in my painting called “Treats?” Other painters, such as Bonnard and Gabrielle Munter also have inspired me. I’ve spent quite a bit of time in France, and I think that this, too, shows up in my paintings, such as “Afternoon at the Cote d’Azur.”


Following this theme of influences, I phoned a few Wilde Meyer artists to see who their muses were. Here are their responses:

Ryan Hale said his biggest influence is the work of the abstract expressionist Mark Rothko. “I particularly like his color field paintings, he explained. “I agree with his theory that color can expressfeeling, and admire his technique of painting thin, then building up layers to create soft, as well as defined areas.” You can see Rothko’s influence in Ryan’s painting entitled “Earthbound.”

Ryan is very interested in aerial imagery, and he refers to maps to provoke ideas about “where civilization ends and nature takes over.” He likes to play with the contrast of organic, unorganized shapes, contrasted with the geometric restraints of the city grids. He explained, “I’m trying to organize chaos.” I think that “The Elements of Nature” expresses this effort.


Barnett Newman is another muse to Ryan. He, too, is known for his color field paintings. According to Wikipedia, “His paintings are existential in tone and content, explicitly composed with the intention of communicating a sense of locality, presence and contingency.” Newman’s influence appears to me in Ryan’s painting entitled “The City Sunset.”


Sushe Felix lives in Colorado. Her southwest landscapes have a distinctive style, which she claims is derived from her interest in American abstract painters from the 1930’s and 40s, as well as the modernist and cubist movements. “In particular, I’ve been influenced by Raymond Jonson, who led the Transcendental Painting Group in Santa Fe,” Sushe explained.

I looked up the group on Google, and discovered that the aim of the Transcendental Painting Group was "to defend, validate and promote abstract art. They sought to carry painting beyond the appearance of the physical world, through new expressions of space, color, light and design."

Thomas Hart Benton, who was at the forefront of the Regionalist movement, also influenced Sushe, as did the southwest regionalist painters, who took the local landscape and abstracted it. She has her own spin on this inspiration, with a strong focus on forms, shapes and color. You can see her unique style in these paintings, entitled “Summer Afternoon” and “Sunlit Canyon.” Sushe has a favorite color palette, using strong complementary colors to draw attention to areas of interest for her.


Rudie van Brussel’s artistic inspiration stems from his very interesting background. He grew up in Surinam, originally a Dutch colony in South America. Although he was first educated in a Dutch school, he was greatly affected by the deep colors of the tropics. Imagine Vermeer and Rembrandt in South America! When Surinam became independent, Rudie and his family moved to the United States, and Rudie attended ASU, obtaining a degree in engineering. But, that was not satisfying, and so after traveling the world, he starting painting, recalling the images and memories of his island life.


“Fruit Table” shows Rudie’s love of color, tempered by a soft layer of shading that reflects the influence of the Dutch masters. In another series, instead of the formal portraits done by the Old Masters, Rudie has chosen to paint animal portraits in a formal, yet whimsical style.  I think Rudie also has been influenced by the magical realism of South America, when I look at his somewhat surreal paintings such as “Feathers” and “Tumbler.” As I said previously, our inspiration often springs from our subconscious – a mix of current and past experiences.

I think we all have muses in our lives – people we admire and who inspire us in our pursuits, artistic or otherwise. And, someday, we may be an inspiration to someone else!

Collecting for a Cause

In June, Wilde Meyer is hosting its 100 for $100 show. Now in its fourth year as an annual event, the gallery at Marshall Way is displaying the work of many Wilde Meyer artists, and each work of art will sell for $100. In addition to offering original artwork for an amazing price, much of the proceeds will go to several animal charities.

“This is a great way to get acquainted with many different artists,” said owner Betty Wilde. “it’s always easy to find a place for a small painting or sculpture, and at this price, you can even make a grouping of several pieces without spending too much.”


I’m excited to be participating again. This time, I’ll have several paintings in the show, including “Cinnabar Green” (I found an awesome new tube of green paint), and “Bruno Waiting.”  And, I’m looking forward to seeing what the other artists are showing. I may collect, too!

Here’s a small sample of some of the works that have been brought in for the show. 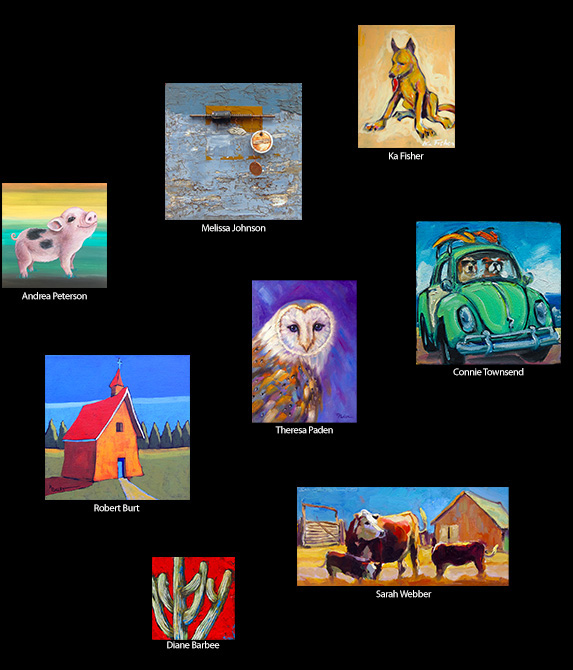 Please know that this event has been so successful, that the gallery will be selling more than 100 works of art through a lottery system. The images will be emailed to all of you; you can put your name on a list for a particular painting starting Thursday, June 2, and a name will be drawn for each painting on Friday, June 3. I hope you’ll participate and enjoy some wonderful new art!

Be on the lookout for additional information coming up via email soon!

Where does your eye go?

The power of the horizon line

A few weeks ago, while driving up to Flagstaff, I felt as if I were enveloped in a mass of fluffy grey clouds. It was pleasant, and yet, disconcerting. Something was a little off, and I realized that it was because from my perspective, the horizon was so low. My view was all about the sky and its atmospheric effect.

Painters use horizon placement as a technique to convey their story. It can orient the viewers to where the artist wants them to be. A low horizon, like the “cloudscape” I saw, suggests a deep, open space; whereas a high horizon places the emphasis on the foreground. If the horizon is basically in the middle of the canvas, then the eye will be drawn more to color and shapes.

When I was pondering the low horizon line, I immediately thought about Albert Scharf, a Wilde Meyer artist who lives in Santa Fe. Looking at Albert Scharf’s beautiful cloud paintings, you can really sense the vastness of the sky I was feeling myself. When I spoke with him, he said that he finds that clouds are an interesting subject because of what they do to the light, and since they have abstract shapes, he’s not bound by form or structure.

“Clouds have an amorphic shape that enable me to pursue my interest in the emotional content of color,” he said.  “Also, the manipulation of their hard and soft edges gives great energy to the paintings.”


At first, Albert just painted clouds, but he then decided to add the thin slice of land below as a counter balance which, he noted, makes the sky look even larger. This is the effect of the low horizon that intrigues me. You can see how this happens in Albert’s painting entitled “Landscape 802.” (Yes, he numbers all his paintings.)  In “Landscape 715,” he has increased the size of the ground and textured it with a palette knife, which separates the land and sky and gives the painting a completely different look.

Although he has seen many beautiful Santa Fe skies in the 30 years he has lived there, Albert does not use local color; rather he prefers to present his ”skyscapes” in analogous saturated hues that transcend through the conscious into the subconscious. “I want to take my viewers to a place where they feel good,” he said. A great example of this technique can be seen in “Landscape #852,” where the sky bursts with hues of pink, gold and violet.

On the other hand, Larry Taylor’s interest lies in the beautiful gardens he paints, so he purposely keeps his horizon line high. He says that it’s his personal preference, “just the way I look at the scene.”

Since the 1980s, Larry has made periodic trips to England and Wales, visiting the gardens of the British National Trust. The photographs he takes on site are used for inspiration in his paintings. In his work entitled “A Quiet Place,” Larry leads the viewer’s eye up the steps to the horizon, and along the way, we are treated to a gorgeous display of red tulips, purple irises and mounds of golden hued flowers. I just want to walk right into the scene!


“The Well-Traveled Path” is another example of Larry’s technique of getting the viewer to travel from the foreground to the end of a path near the high horizon. His clusters of blooms vibrate with color. Although our eyes are initially attracted to the brilliant red flowers in front, we still want to go up the path and see what’s going on at the house in the background.

Is horizon line placement always important to create drama? Not necessarily. Judy Choate is more interested in perspective and balance when painting her stylized landscapes. The excitement in her work comes from the brilliant colors and somewhat abstract shapes she uses to convey her impressions of the mountains of the Southwest. Judy has observed their interesting formations for years, while living in Sedona, on driving trips, and, now near her home in Tucson.

In her large (48”X60” painting entitled “Approaching Storm,” the horizon is actually in the middle of the scene. She catches our eye in a different way, by painting dark shapes in the foreground as a foundation, describing the mountains in warm pure hues in front and in more opaque colors behind. The slash of deep blue defines the horizon and adds more depth. Then our eye goes up to the whirling shapes of the sky.

Judy often lets the shape of a canvas determine her design. For example, in “Approaching Sunset,” the 20”X60” format dictates a wide-angle view of the mountains. We see a piece of the horizon line behind the golden shapes, where the sky swirls upward.

Some artists do away with a horizon line altogether. But, that’s another story, another blog!