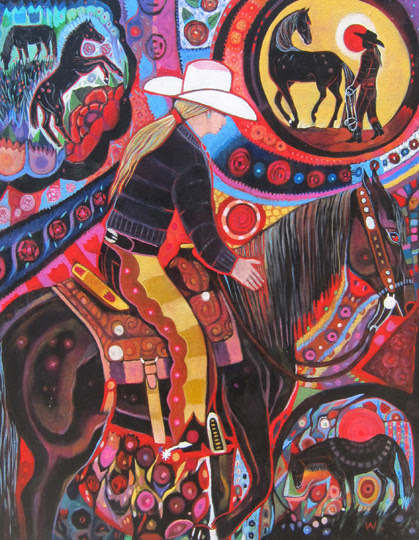 The “cowboy artist” has long been associated with American art. The lore of the West and the cowboy lifestyle are good source material for many painters. Some artists like to portray these themes in a more contemporary way. The cowboy – or cowgirl – is still in the picture, but in a stylized, interpretive manner.

For example, Amy Watts – who is actually a southern gal from Georgia – has a unique style that enables her to tell her stories in a modern way.

“I’ve been a cowgirl all my life,” she said. “Western history has always fascinated me, and I was a horse trainer for 20 years. Amy received a college degree in art illustration, but she didn’t start painting seriously until she stopped training horses. Her epiphany came at a visit to the Booth Western Art Museum in Cartersville, Georgia. “I admired the paintings of Shonto Begay, and I realized that I was already interpreting Western art in a more contemporary way.” 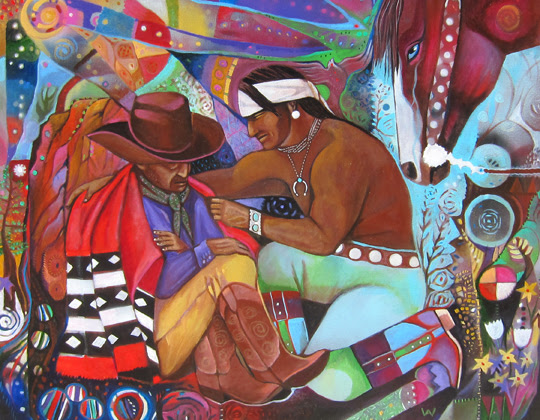 "The Good Samaritan"
by Amy Watts

Amy says she likes to tell a story in her paintings. In “The Black Mare’s Life,” Amy portrays the life cycle of a horse. Surrounding the focal area of the horse and its cowgirl rider, there are smaller sections that depict its life. The upper left circle shows the young horse in a field with its mother; in the upper right circle, the horse is being trained for the first time by a cowgirl; and in the lower right area, the horse has been turned out to pasture in retirement.

A key component of Amy’s contemporary take on western art is her use of patterns and her illustrative style. “My grandmother was a quilter, and I think that influenced me. Also, I grew up around roses, and that pattern appears frequently in my work.”

“The Good Samaritan” is another example of Amy’s modern interpretation of an old story. Taken from a biblical parable of hope and how one should behave, this painting depicts a Native American man helping a stranger. The figures are stylized, and the colorful patterns create a finely designed background. It pays to look at Amy’s work closely, since something new is always emerging from the painting! 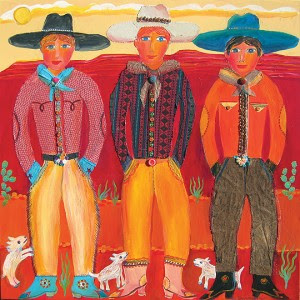 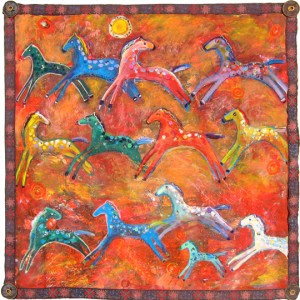 Charles Davison has a different approach to a southwestern theme. A collector of textiles, beads, buttons and other items, he creates collage pieces that present his subjects with a fresh approach. In his painting entitled “Back Road Boys,” the cowboys strike a typical pose, but the mood is very playful. The colorful clothing is cut from different fabrics, and collaged, along with buttons on the shirts and neck scarves. Another evidence of Charles’ contemporary style is his layering of paint, fabric and paint again to create the textures he wants. 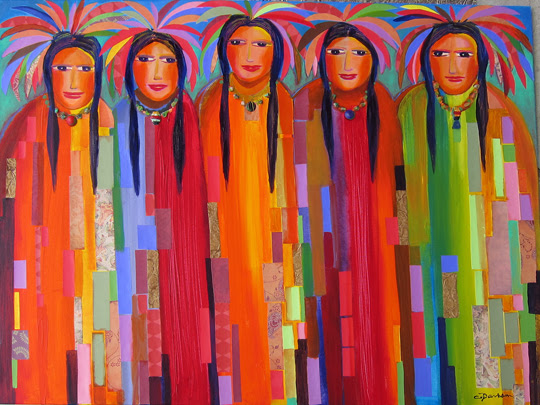 "Night of the Vision"
by Charles Davison

His love of textiles can also result in a new textile of Charles’ creation. “Running Horses” is presented on an unstretched canvas, painted with many layers and collaged with fabrics and bits of beads and buttons.

Charles is inspired by southwestern art, as well as the rock formations around his home in Superior, AZ. “My work is more mystical than representational,” he said. In “Night of the Vision” he alludes to Native American spirituality, and clothes his characters in strips of fabric, beads and antique jewelry.

Thom Ross calls himself a “storyteller who paints.” His narrative art has a very specific theme and purpose. He focuses on iconic western American heroes who have become mythic figures. 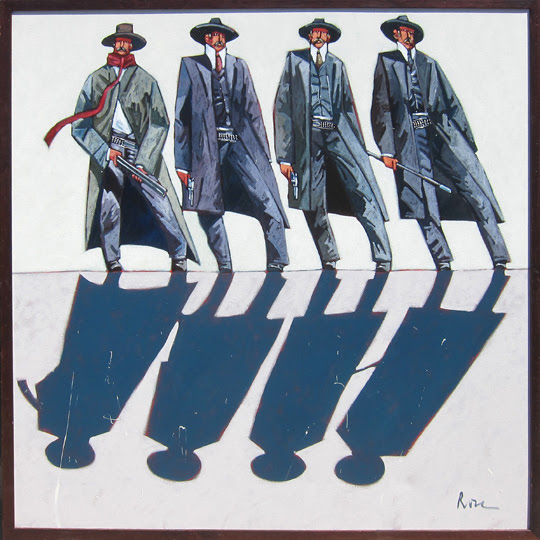 “I’m interested in how we take a story with an historical foundation, and turn it into a more romantic version of the actual truth,” he said. “In my paintings, I like to depict these heroes as real people who are actually much more interesting as human beings with their own flaws.”

Thom sees the humanity in his figures, but he still portrays them in a stylized, graphic way. These cowboys are active, yet they appear flat. Their long legs stretch under full-length coats, and their macho look is accentuated by their strong – yet not very defined - faces under their big-brimmed hats. I especially like the geometric shadows he places under his figures. A good example of Thom’s style is his painting entitled “They Cast Long Shadows,” which refers to the three Earp brothers from the gunfight at the OK Corral.

“These men cast long shadows in our western culture,” he said. “They are insignificant outside of their mythology, which embodies the human spirit and courage.”

"The Clantons"
by Thom Ross

The “Clanton Gang” also refers to the story of the OK Corral. The Clantons are crossing Allen Street and going to their death, according to Thom. The line he painted underneath each figure is symbolic of their crossing and their courage. “With that decision, these unknown men become part of a world famous story,” he explained.

These contemporary artists express many themes we already know, but it’s nice to see them portrayed in a new light.